Visit your local RSPCA/SPCA/animal shelter and provide a homeless or abandoned animal a loving home. 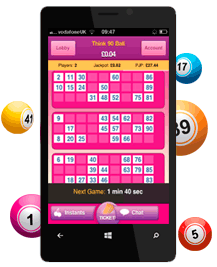 Bingo sites with Android-based apps give you a chance to play mobile bingo on a variety of devices.

Something we see in today’s mobile bingo world is that there are different apps for different types of devices. What’s so interesting about Android as a mobile operating system is that it can be used in an extremely wide range of applications from eReaders to smartphones. There are even home appliances like refrigerators that are WiFi-enabled that use versions of Android. Because of this, if you want to play bingo on your Android-powered device, you’ll be dealing with an extremely flexible platform.

Bingo Blitz- This apps is cross-compatible with Facebook and can be used in over 100 bingo rooms. This app allows you to play in a real-time multiplayer.

Bingo By IGG- This app is a hybrid game that features both bingo and slots. It’s quite popular at the Google Play Store and is much like Bingo Blitz. You do need to play games with gems though and you only get so many gems per day. Don’t let this scare you off as it’s still a great option.

Bingo Crush- This game allows you to play in 20 rooms and a dozen collectible items for you to discover. With this app, you will be able to play with players from all over the world.

BINGO!- This app is a basic bingo game that you can play for free. There are 20 rooms available to play in and this app offers online multiplayer modes. A bonus is; you are able to play offline if needed.

Bingo Gem Rush- This game is quite different and instead of waiting for the balls to be called and then marking them off, you race to the finish to see if you can beat the other players. This app does not restrict the number of games you can play, which is refreshing.

The Flexibility of Android Bingo Rooms

Mobile itself is very flexible in that you can take your devices anywhere you want, and using a device powered by Android just extends that flexibility. Whether you’re waiting in line at the store or sitting in a lobby waiting on an appointment, you can play mobile bingo with many different Android devices, including smartphones, tablets, electronic readers and others. Because you aren’t tied to one particular brand of phone, you can use devices from several different companies as well, including LG, Samsung, etc. This gives the players even more power to choose how they get in on the bingo action.

Some players have shown concern over the fact that Android bingo devices can have many different screen sizes. However, the sites themselves have prepared for the lack of standardized screen sizes by developing bingo apps that work on any size screen. They scale appropriately without shrinking the controls to be too small, and everything always looks good on both smartphones and tablet-sized devices. This ensures that the player always has a good experience since the visual quality of the bingo cards and controls is an extremely important part of the overall playing experience.

There are four main styles of bingo played on sites that allow the use of Android devices. While they’re named after the number of balls used (30-ball, 75-ball, 80-ball and 90-ball), the real thing that matters for mobile players is the size of the cards, which varies wildly between the three types.

Luckily for Android mobile bingo fans, the apps created in this operating system are able to scale and zoom the card for all four major types of bingo appropriately without making it difficult to see what you’re doing or which numbers are on the cards. In terms of flexibility, this adds yet another layer to the mix with even more ways to make sure different fans of different games are able to enjoy themselves without hardware limitations on these devices.

Even though there are all of these hardware features that make it easy to play these games, almost every Android bingo app out there has an auto-complete option that will fill in the numbers that are called for you so that you don’t miss any. It’s easy to be distracted for just a moment from your mobile device, which would normally mean you could miss out on a number. With this feature, however, that’s not a concern.