No Deposit Bonus Code: Not Available.

Reloads: This depends on your loyalty level.

Ticket Prices: 1p and up

Other Games:Deal or No Deal 75 and 90, Cheap as Chips, Who Wants To Be A Millionaire, Diamond Dazzle, Need For Speed, Big Bang.

Customer Support: Email support for BGO Bingo is only available from 8:30 am to midnight

A slew of promotions is on offer at BGO Bingo round the year, whether it be daily, weekly or during festivals when the prizes get bigger. During Christmas, for instance, players could enter the £100,000 Christmas Giveaway, with a £25 entry ticket fee. The first lucky winner stands to win a £50k bonanza, while multiple players can win other prizes of £10k, £10k, and £100 denominations. An ongoing mega jackpot is the ‘Unwrap a share of £5M!’ promotion, under which players share guaranteed cash prizes of whopping £5,000,000.

On Thursdays, BGO Bingo players can win up to £30k in prizes under the Value Nights promotion, with ticket prices starting as low as 1p. Players can also enjoy daily offers of Golden galaxy and Fairy Delights rooms from Monday to Sunday. Both these rooms are also featured in another promotion called Chat Specials wherein players join chat games to win daily bonus cash.

The Beginner’s Luck room promotion is another welcome gift from BGO Bingo requiring a simple 1p registration. Thereon you get access to free bingo and a chance to win a share of £10 for seven days.
Weekly £15,000 super jackpots can be won under the Bingo Linx promotion in Peggy’s Palace, the Fairy Delight, Golden Galaxy, and High Five rooms.

Apart from all this, BGO Bingo also rewards its loyal players for every cash game played through the Candy Club loyalty program. Players can proceed from the Chocolate entry level to other VIP levels Toffee, Nougat, Caramel, and Candy. These qualify them for higher birthday bonuses, greater access to VIP rooms, and increasing the redemption value of the loyalty points earned at each level.

We also recommend Paddy Power Bingo, Bingo On the Box and BingoCams for players from the UK. 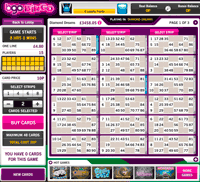