Visit your local RSPCA/SPCA/animal shelter and provide a homeless or abandoned animal a loving home.

How To Play 30 Ball Bingo

If you’re an avid online bingo player, you must have already heard of 30 ball bingo. It’s a condensed version of the 2 most popular variants 75 and 90 ball bingo. While they are the most popular two variants ever, the former is a newer variant that was introduced in order to spice things up and attract a new audience, an audience who enjoys action and fast-moving gameplay.

There are no accredited websites that offer 30 Ball Bingo. See our top online bingo sites to play other variants.

30 ball bingo is exactly what its name implies: a bingo variant where you get a ticket to fill with numbers from 1 to 30. It differs from the older variants in its speed and easiness to be played. Now, if you want to learn all about it, its rules, and how to play it, continue reading our overview.

The first thing we need to explain before you even attempt to start playing this online bingo variant is that it is a condensed version of your already familiar variants. What does that mean? It means that its ticket consists of a condensed number of rows, columns, and number choices for you to select. So, you’ll get 3 rows with 3 columns, and only 9 numbers to choose from. The first column contains the numbers from 1 to 10, the second 11 to 20, and the third 21 to 30.

As far as the rules go, it is based on the same principles as 75 and 90 ball bingo, only with fewer number values, an improved chance of winning, and faster gameplay. On that note, this variant is often called speed bingo, since the time between one ball drawn and another is significantly shorter. That’s right, a single game lasts only a few minutes, so you can play several times in the course of half an hour.

How to Play 30 Ball Bingo

The gameplay is quite simple, as is the objective: the first player who completes the pattern of number wins. The pattern of numbers can be chosen manually, so you can play your lucky numbers, or randomly, by clicking on the “Auto-Select” button.

After you have your ticket ready, the ball wheel starts spinning. When the ball is drawn, you can mark the number on your ticket on your own, or have the game mark it for you. Should you fill up your card with winning numbers, the numbers drawn, you get a “full house” and you win. As simple as that. 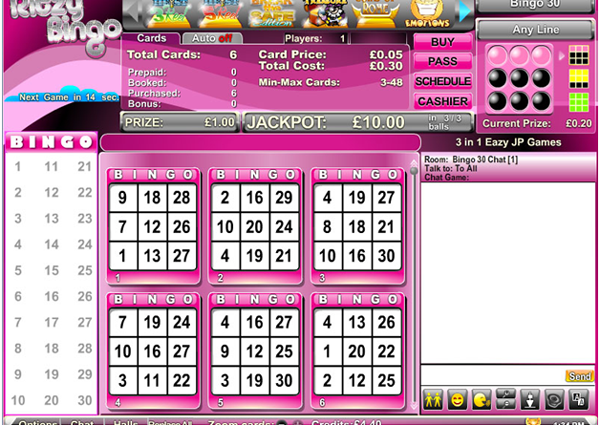 The beauty of 30 ball bingo is in its speed, obviously, but that’s not all to it. Sure, due to the fewer number values involved balls are drawn at a faster rate than with 75 ball and 90 ball bingo, but that gives you another benefit: continued excitement and involvement in the action!

Plus, it is perfect for new bingo players as it is so easy to be played. There are no complicated rules that you need to follow in order to master it. But, it is also great for experienced bingo players looking for a refreshing bingo variant to keep their adrenaline pumping. And then, of course, there’s the fact that due to the fewer numbers involved, you also get better chances of winning.

Now, due to all of these benefits, online bingo sites have started offering this incredible variant more often. Previously, it was really hard to find an online bingo site that offered it, but as soon as operators saw players’ interest in it, they started creating all kinds of exciting, themed bingo rooms for players to join, with live chat rooms where they can talk to one another. All things considered, 30 ball bingo can be highly immersive and fun to play, and rewarding, considering the odds are on your side.

Related How To Play Bingo Articles: